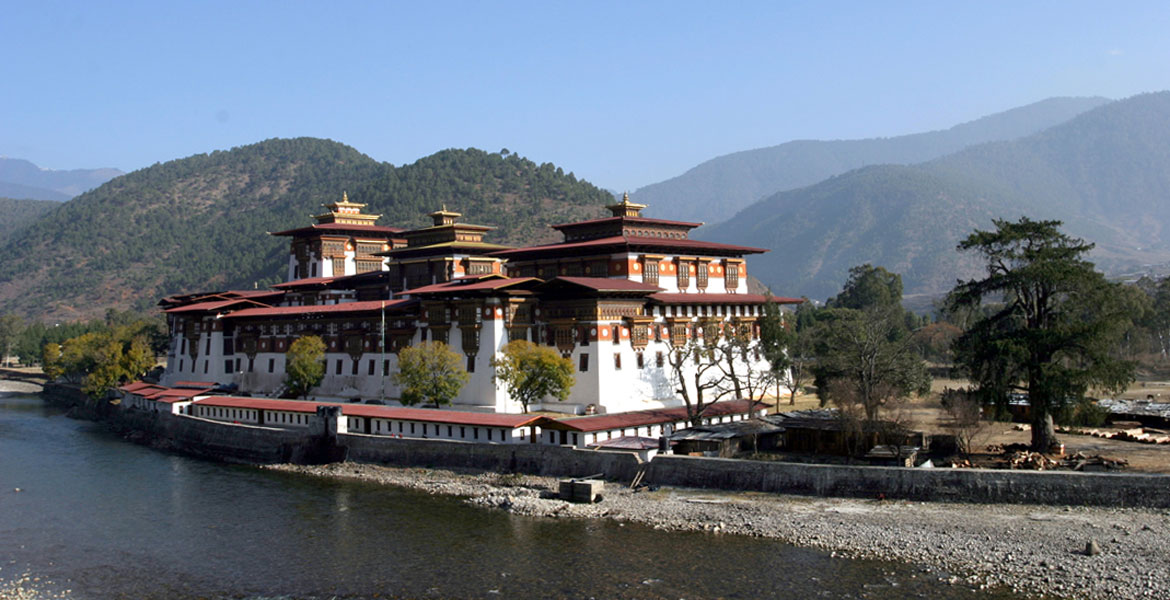 Punakha has been inextricably linked to some of the most momentous events in the Bhutanese history and deserves its reputation as one of the most beautiful and significant regions at the heart of Bhutanese culture.  This district, levelling from 1300m at the valley floor rises to almost 3000m around Dochhula pass, served as the capital of Bhutan from 1637 till 1907 and the 1st National Assembly was held here.  The dzong is historically important and stands as the symbol for a unified Bhutan.  Visit Punakha Domche and relish the revelry of medieval warriors and also the coming of textiles to life.

Placed strategically at the junction of the Pho Chu and Mo Chu rivers, the dzong was built in 1637 by Zhabdrung Ngawang Namgyal to serve as the religious and administrative seat of the region. It was here that the dual system of government was introduced in the 17th century and in 1907, enthroned the first King Gongsr Ugyen Wangchuck. Damaged over the centuries by four catastrophic fires and an earthquake, the dzong has been fully restored in the recent years by the 4th King Jigme Singye Wangchuck.  At the dzong enrich your trip with the opportunity to see the highest standards in woodwork. Do not miss the massive Kuenray, the Coronation Hall of all Bhutanese kings, the Dzongchung at the entrance to the dzong and the cantilever bridge over the Mochu that has been recently renovated.

There is no temple in Bhutan built elaborately as this. This fascinating temple was built by the Queen Mother of the 5th King to bring universal peace in this world. The best of the spiritual art works are painted on the inner walls. There are also paintings of Buddhist teachers and tutelary deities of the country. This is a great temple to study the symbolic meanings from frescoes and sculptures.

The divine madman also known, as Drukpa Kinley is a famous teacher with whom the phallic symbol is associated. Tales told by your guide would have excited you to visit Chhimi Lhakhang. The Divine Madman sits there though a statue this time. Do not miss the master’s deeds painted on the walls.  Japanese and several American couples visited this temple and were blessed miraculously with children. Ask yourself, do I need this Fertility Tour or not?

A day excursion to Talo would be great with picnic lunch. The festival there happens in spring and will capture any visitor’s attention. Let your tour take you there in summer during corn harvest. It’s an adventure to enjoy corn harvest with the farmers and also an opportunity to look for Himalayan bear. A walk through Talo and down to the other village of Nobgang will be a great day’s itinerary.

Locals call this place Dalayna and the monks call it Nalanda Buddhist College. If you want to chat up with monks in English then this is the place to go. The monks here are dying to practise the new language they learn.  Drive there in the afternoon and enjoy your evening tea supplemented by the ravishing view in front of you.

The walk to Chorten Ningpo passes through several villages. Many visitors love this walk in summer and in autumn. In summer the rice fields are lush and gardens are filled with multitudes of vegetables and fruits. Likewise autumn enchants visitors with the golden hue of ripening rice. For adventure loving hard core walkers we recommend a detour to Hokotso, a lowland lake that holds many legends. This is recommended in autumn though