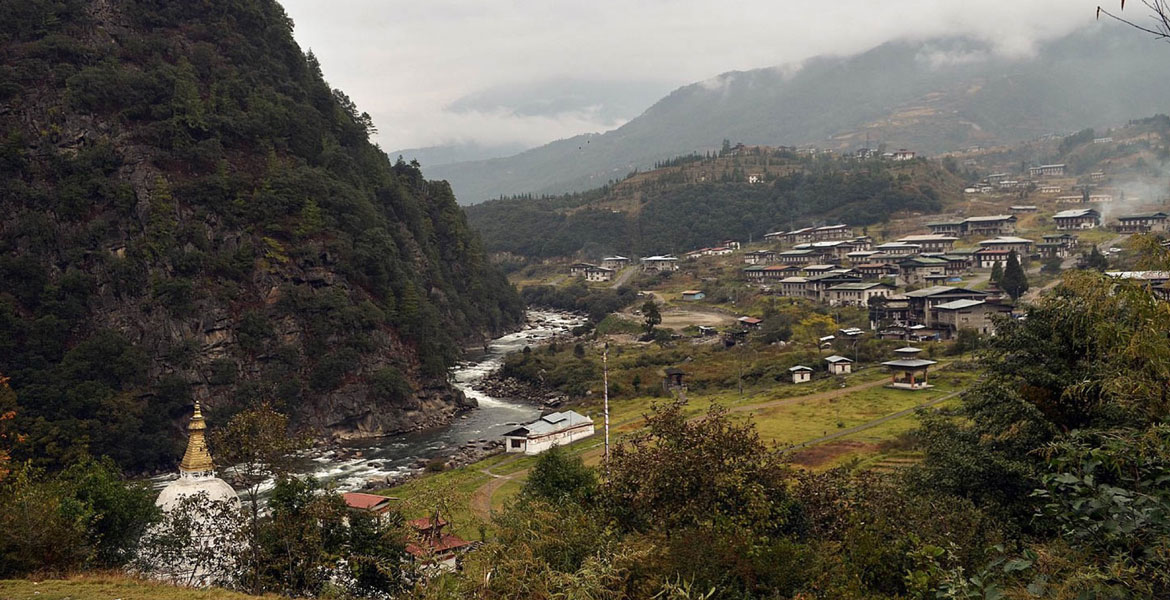 Trashiyangtse is a rapidly growing town and the administrative and religious center for the people of Trashiyangtse. It was carved out from Trashigang district in 1992 as a separate district. The district pushes up to into the north-east Indian state of Arunachal Pradesh and elevations range from 1000m to 5000 m. Situated in a small river valley, it is a lovely spot from which to take walks in the surrounding countryside.  Trashiyangtse is famous for its wooden containers and bowls, which make inexpensive, attractive and useful mementos of a visit to this remote region.

One of the oldest Dzongs to have been built in the region, Dongdi Dzong is located on a small spur flanked by Kholong chu and Dongdi chu. A traditional cantilever bridge over Kholongchu links with the Dzong. It was established sometime in the 8th century by Gongkar Gyalpo, son of Lhasey Tsangma, a Tibetan Prince who sought refuge in Bhutan after his exile from his native country. In the 14th century it was reconstructed by Terton Pema Lingpa and named as Trashiyangtse. The current structure was renovated in the early 1990’s. Today it houses the monk body and a sacred relic is a statue of Avaloketeshvara that was offered as a relic or nangten by the deity of the river.

This dazzling white stupa is situated on the riverbank below the town. Constructed in 1740 by Lama Ngawang Loday, it is built in the same style as Bodnath Stupa in Nepal, with eyes painted at the four cardinal points.  It was consecrated by the 13th Chief Abbot Sherub Wangchuk. During the second month of the lunar calendar there is an interesting celebration here, known as ‘Kora’ during which it is frequented not just by the locals from eastern Bhutan but also by the people from Arunachal Pradesh.

A visit to the traditional institute of Arts and Crafts above the town will provide you with an insight into the different arts and craft works practiced in Bhutan. The institute started a few years back and with support from the Government, trains many school drop outs in the arts and crafts.

A pleasant walk of about three hours following the Kholongchu river from Chorten Kora, Bomdeling is an annual migration place for black necked cranes, which fly over from nearby Tibet to pass the winter months in a warmer climate. On the way one can also visit the farm houses and their make shift cottage industry where they churn out bowls, cups and plates of wood.

An hour’s walk through the paddy fields and a gradual climb over the woodlands will take you to the sacred temple of Rigsum Goemba. This temple was founded in the 18th century by Lam Tshering Gyatso, the disciple of Sakya Rinchen, the 9th Chief Abbot of Bhutan. Unlike other structures in eastern Bhutan, the wall is built with pounded mud, a style used in western Bhutan.

In Tshenkharla, just above the school, is situated one of the oldest Dzongs to have been built in Bhutan. Widely known as Tshenkharla Dzong, the ruins are still standing and surrounding it, one can come across the remnants of the settlement such as large stones used for pounding grains. It was built by Lhasey Tsangma, a Tibetan Prince who sought refuge in Tshenkharla in the 8th century AD. He is regarded as the founder of many important clan systems in Bhutan that dominated the political scene till the mid 17th century. A visit to the ruins will give you a glimpse of ancient Bhutan besides a scenic view of the Dangmechu river and Tawang in Arunachal Pradesh in India.

24 km. from Trashigang, the temple of Gom Kora is set on a small alluvial plateau overlooking the Dangmechu river.  Surrounded by rice fields and clumps of banana trees, it looks like an oasis in an arid landscape.  It is one of the famous places where Guru Rinpoche meditated in order to subdue a demon which dwelt in a huge black rock. An annual tshechu held for three days in spring draws a lot of attraction with pilgrims coming as far as from Arunachal Pradesh, India.