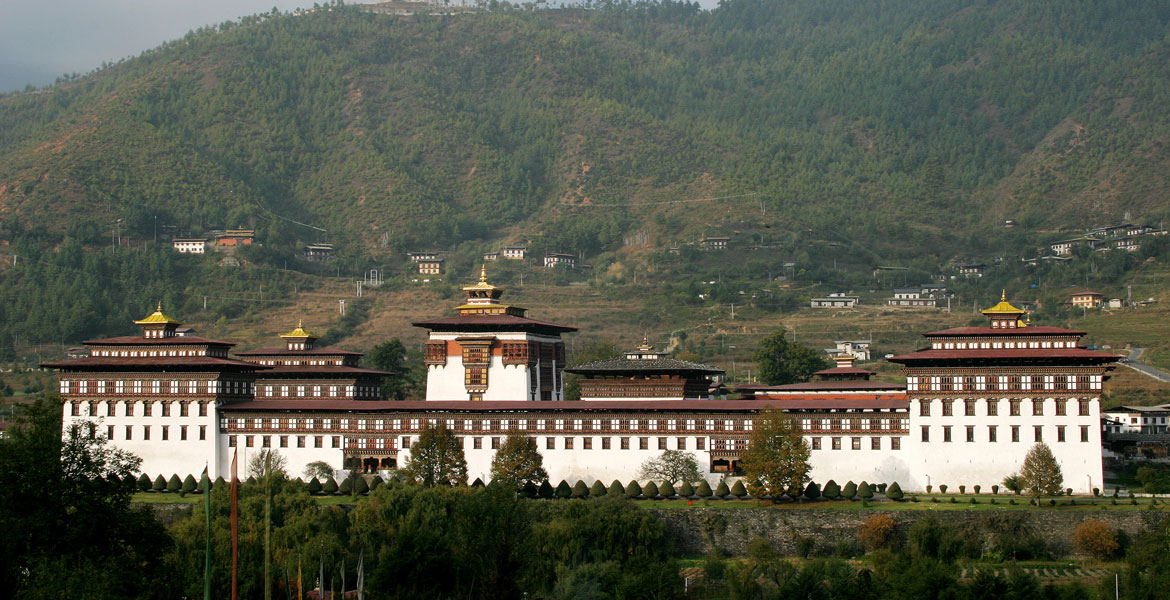 Thimphu, situated at an altitude of 2400m, is the centre of government, religion and commerce. The capital has an interesting combination of tradition and modernity, and includes some of the most advanced and remotest parts of the kingdom.  It is home to the Kings and the Royal family members, civil servants, expatriates, politicians, business persons and monks. Enjoy this cultural mix based on livelihood.  Of culture we will take you through temples, dzongs, chortens, museums, handicraft stores, nunneries, parks and many more. Allow yourself to meet both traditional and contemporary artist.

Meet the elderly generation in circumambulation at the National Memorial Chorten. Chorten literally means ‘Seat of Faith’ and Buddhists often call such monuments, the ‘Mind of Buddha’.  Treat yourself with the extraordinary depiction of Buddhist teachings in the form of paintings and sculptures. As the name denotes this National Memorial Chorten was consecrated on July 28, 1974 in memory of the Third King.

The “fortress of the glorious religion” was initially erected in 1641 and rebuilt by King Jigme Dorji Wangchuck in the 1960s.  Tashichhodzong houses some ministries, His Majesty’s secretariat, and the central monk body.

Stroll through the very first dzong, built in 1627 by Zhabdrung Ngawang Namgyal.   The Institute for Language and Cultural Studies is located here. Enthral yourself with the most noteworthy artistic feature in the form of over 300 finely worked slate carvings behind the prayer wheels in the courtyard.

This temple situated atop a small hound overlooking the Thimphu valley was built in the 13th century by the illustrious Lam Phajo Dugom Zhigpo. The temple is considered the spiritual home of children born in the Chang valley.

The only nunnery in the Capital it is popularly known as Zilukha Anim Dratshang. It is located above Zilukha Lower Secondary School, overlooking Tashichodzong in Thimphu valley and is a few minutes’ drive from the town. It was built in 1976 by the 16th emanation of Thangtong Gyalpo, Drubthob Rikey Jadrel. You may interact with some 60 nuns or so that has devoted their life to spirituality and Buddhism.

The National Library was established in the late 1960s primarily to conserve the literary treasures which form a significant part of Bhutan’s cultural heritage.  It now houses an extensive collection of Buddhist literature mostly in block-printed format, with some works several hundred years old.  There is also a small collection of foreign books, stock of which mainly comprises works written in English. Take the opportunity to see the world’s biggest book stationed in the ground floor.

Commonly known as the Painting School, the Institute offers you a glimpse of novices learning 13 traditional arts and crafts of Bhutan.  It is a hands-on trip for you. Enjoy few moments with the future artists of the country.

In Bhutan, equal emphasis is given to both allopathic and traditional medicines. The rich herbal medicines made from medicinal plants abundant in the kingdom are prepared and dispensed here.  The Institute is also a training school for traditional medicine practitioners. The complex is closed to visitors due to considerations of hygiene, but one can still walk around and visit the showroom.
Folk Heritage and National Textile Museums: These museums, both of which opened in 2001, provide fascinating insights into Bhutanese material culture and way of life. One may come across some interesting facets from rural Bhutan that is slowly being replaced by modern amenities. The water driven grinding mill may captivate your zoom lens.

A wide assortment of colourful, hand woven textiles and other craft products is available for purchase at the government-run Handicrafts Emporium and many smaller handicrafts shops around the town. One can pick up small items as souvenirs.

Most of the Thimphu’s population and many valley dwellers converge on the bustling weekend market, held by the side of Wangchu River.  A wide range of foodstuffs and local arts and crafts are sold at the market, which runs from Friday afternoon till Sunday evening.  A visit to the market provides great photo opportunities, as well as the chance to mingle with local people and perhaps buy souvenirs.

The best place for photographers is perhaps a visit to the Sangaygang hill. A short drive from the town, the hill provides visitors with an opportunity to pause and reflect in the hustle-bustle of a busy city-life. You can also have a panoramic view of the valley. On the way back you can visit the small zoo dedicated to the Takin, the national animal of Bhutan.

Another place from where you can get a good overview of the Thimphu valley is from the Buddha point (Kuensel Phodrang). It is again a short drive from the town. You can pay your obeisance and offer prayers to the Buddha, the largest statue in the country and then walk around and take a glimpse of the valley.

The Thimphu tshechu that is held for four days is a major event in the capital drawing hundreds of people from the villagers to the civil servants and the politicians. It also draws a large number of tourists. One attraction of the tshechu is the Wang Zhey, a folk dance from the Thimphu valley.