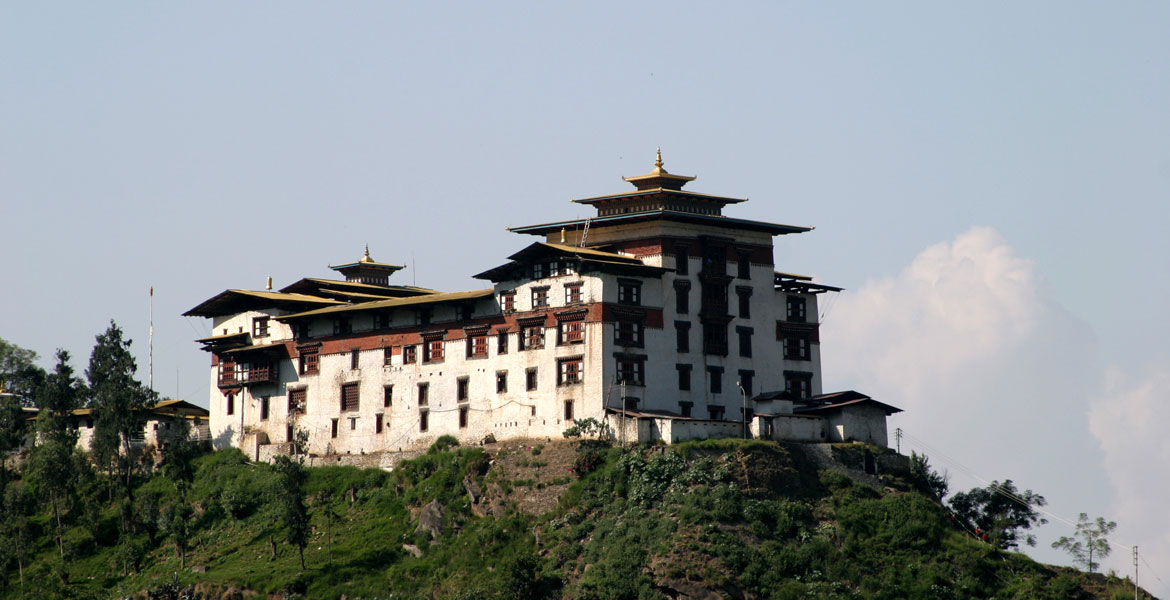 Trashigang spans the easternmost corners of the kingdom, skirting up to the edge of the Indian state of Arunachal Pradesh, and is the country’s largest district.  The district has an altitude ranging from 600 m to over 4000m and Bhutan’s largest river, the Dangmechu, flows through the district. Trashigang town, on the hillside was once the center for a brisk trade with Tibet.

Today it is the junction of the east-west highway, with road connections to Samdrup Jongkhar and then into the Indian state of Assam.  Trashigang town is also the principle market place for the semi-nomadic people of Merak and Sakteng, whose way of dress is unique in Bhutan.

Built in 1659, atop a spur overlooking the Dangmechu river, Trashigang dzong or the fortress of the auspicious hill has been the political stronghold of eastern Bhutan for over 300 years. The Landscape on which the Dzong stands is not only picturesque but arouses curiosity. The hillock like Mount Meru is the site of the palace of the Druk Chhoglay Namgyal (victory of Bhutanese Over enemies in all directions). It is accessible only from the north, through a slender road, paved by blasting the cliff. Due to its location Trashigang Dzong is one of the most strategically placed Dzongs in Bhutan. The present Dzong was enlarged by Dzongpon Dopola, in 1936.

An hour and a half drive away from Trashigang through a feeder road will take you to the village of Bartsham. One can visit the Goemba Ringbu or the popularly known Chador Lhakhang that is known for fascinating tales revolving around its famous thumbsize replica of Chador, Vajrapani.

A ten minutes drive from Bartsham will take you to the village of Bidung where you can visit the most venerated temple in Trashigang, the Bremung lhakhang. It dates back to the 15th century and a sacred relic is the embalmed remains of its founder Kuenga Wangpo, son of Terton Pema Lingpa.

On the other side of the valley across Dangmechu, is the village of Yangneer where one can visit the Kupijigtsam lhakhang or the temple of the cuckoo. Built in the 15th century, this lhakhang is another sacred monument in Trashigang. Besides one can visit the Tsengmi lhakhang in Gongthung village and the Jarung Khashor temple.

A 22 kilometres drive on the highway that connects Trashigang with Samdru Jongkhar will take you to Kanglung where one can visit the Zangdopelri lhakhang. Built in the early 1970’s at the initiative of the late Tamzhing Jagar, the Minister for Home and Cultural Affairs, the lhakhang houses some of the most intricately designed statues besides a Shedra, a monastic school headed by a Khenpo.

In Kanglung, besides the Zangdopelri, another place of visit is to Sherubtse College or the Peak of Learning. Founded in the late 1960’s as a Higher Secondary School, Sherubtse College was until recently the only Institute of Higher Learning in the Country. It was run by the Jesuits from Canada and Late Father William Mackey was its first Principal. The College has been instrumental in providing the much needed human resource for the country as much of the Graduates were employed by various Ministries, Corporations and Organziations.

Further up the road from Sherubtse College is located the oldest temple in Trashigang – the Yonphu Lhakhang whose establishment cannot be ascertained. It houses several sacred relics and a Tercham that is conducted twice in a year commemorates the feats of religious luminaries like Guru Padmasambhava.

Further east from Trashigang, driving north will take you to another commercial hub in Trashigang, the Rangjung town. This once sleepy town is today a major commercial center where people from five gewogs congregate and carry out brisk businesses. Besides the town one can visit the Rangjung temple located on a small hillock overlooking the town. The temple built in the architectural style of the Tibetans has a monastic school supported by HH Garab Rinpoche.

Above the Rangjung town is the famous Radhi village known as the Rice Bowl of the East. A drive through the terraced rice fields is an unusual experience and one can visit the traditional farm houses and peep into women folks strapped to the traditional looms. Radhi women are experts in weaving and are known for the silk textiles that has found their way into many handicraft shops in the capital town of Thimphu.

An hour’s drive from the Rangjung town will take you to Phongmey a quiet but a quaint village through the rice fields. At the end of the road is the Namdu Choling lhakhang widely known as the Phongmey lhakhang. Built in the late 1890’s this lhakhang serves the spiritual needs of the village. Opposite the lhakhang across the Gamri Chu river is the abode of the local deity Meme Ralang where one can see hermitages on its top.